Former President John Dramani Mahama has expressed his appreciation to supporters of the opposition National Democratic Congress for supporting his candidature to lead the party going into the 2020 elections.

According to Mr. Mahama, he is overwhelmed by the generosity of party members to fund his re-election bid.

MPs, constituencies and private individuals have given varieDMonday amounts to support his campaign.

On Monday, some sympathizers of President Mahama gathered at his office to donate some amounts of money towards his campaign.

Mr. Mahama in a post on social media  the act of generosity on the part of the party faithfuls is proof that ‘unity, solidarity, dedication and hardwork’ is enough to get the NDC back in Government and alleviate Ghanaians from what he describes as “hardships of the suffering masses” under the NPP Government.

“Through your generosity you have once again proven that with unity, solidarity, dedication and hard work, we shall win election 2020 to alleviate the hardships of the suffering masses”

Former President John Mahama also revealed that his supporters raised “more than enough” funds to support his campaign within 24 hours, a feat he describes as ‘humbling’.

He also added, the many of the support he received were from Ghanaians who are not known supporters of the NDC.

“I am overwhelmed by your generosity- that within 24 hours many of you, not only known supporters of the NDC, have come together and raised more than enough to support the cost of picking my forms and filing the nomination to lead our great party to #Victory2020”

“I am further humbled by the teeming number of you, who gathered in my office to contribute your widows mite to my campaign. Thankyou.”

There however appears to be some level of bias and open support from some constituency executives in the party for Former President Mahama.

Aside singing and loudly chanting Mr. Mahama’s name at their recently held congress at the Trade, it is also been widely reported that some party offices have been covered with posters of Mr. Mahama.

Boycott by other aspirants

This comes as some aggrieved aspirants in the NDC flagbearer race have boycotted the processes for the presidential primaries claiming the processes are unlawful.

In a petition, they accused some members of the party’s National Executive Committee (NEC) of bias and said the could not be trusted to ensure a free process.

The nine aspirants proposed that fees for collection of forms be GHS 5,000 whiles the filing fees be GHS100,000.

The aggrieved aspirants also feel the filing fees and other guidelines for the primaries “appear to have been designed to favour of that same aspirant,” who is implied to be Mr. Mahama.

In contrast, Mr. Mahama is having a relatively stress free march to the primaries.

Some 96 National Democratic Congress legislators have purportedly raised over GHc 600,000 for Mr. Mahama’s bid to become the NDC flagbearer, according to the Kumbungu MP, Ras Mubarak.

“Initially, we thought we would just raise GHc420,00 cedis but very interestingly, a lot of support in terms of raising the funds has come from friends, well-wishers and members of the party. From the last count we’ve raised a little over GHc 600,000,” he told citinewsroom.com. 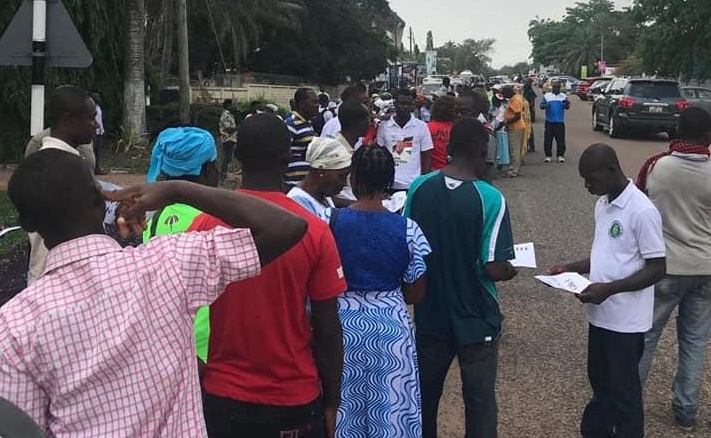 As other aspirants are fighting the National Democratic Congress’ (NDC) hierarchy over the cost of nomination forms and filing fees for the presidential primaries, forms have been picked up and paid for on behalf of former President John Mahama.

The forms were picked up by a delegation from the Asawase Constituency, which earlier pledged to pay for the GHc 20,000 nomination form after the former President visited the area.

He said the community owed former President Mahama a debt of gratitude for the development he brought to the area.