Xiaomi has outed a new teaser for its upcoming Mi 5S flagship smartphone. The teaser contains a number 164,119, which reports say is the device’s AnTuTu performance score. 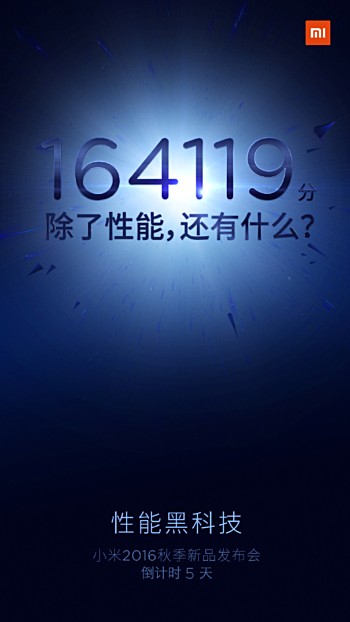 If you recall, a recent Mi 5S leak had revealed an AnTuTu score of over 164K for the phone, so it is entirely possible that the Chinese company is boasting about the handset’s performance in the teaser image.

Aside from this, the teaser also contains a question: “What new high-end technology Xiaomi __S has in addition to performance?” This effectively suggests that the rumors of the device featuring Qualcomm’s ultrasonic fingerprint sensor and an iPhone-like 3D Touch may well be true.

To refresh, from what has been revealed so far, the Xiaomi Mi 5S will be powered by Snapdragon 821 SoC, and sport a 5.15-inch display. It will have 6GB RAM and 256GB storage as well as 16MP rear camera, and pack in a 3,490mAh battery. The device isscheduled to be unveiled on September 27.