Ghana’s contingent to the 2018 Youth Olympics in Buenos Aires has arrived in the South American city. The team touched down in Argentina on Monday for the Games which will start on October 6 to the 18th.

The athletes are being supervised by Mr Evans Yeboah who is the Chef de Mission of Team Ghana.

Before their team’s departure from Accra, Mr. Yeboah disclosed that any gold medal won would attract a reward of $5,000, while a silver medal would get a $3,000 reward and a bronze medal winner will get $2,000 as a reward from the state.

Per the Games schedule, weightlifting, beach volleyball and swimming start on October 7 with athletics starting on October 13. 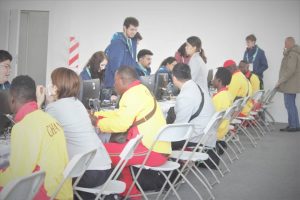 What are the athletes saying:

“The ultimate of all these competitions is to win a medal and we are fortunate to get the opportunity to represent Ghana, so we have no option than to go all out to deliver the needed results at the Youth Olympic Games.

Fortunately, we have companies like Ashfoam and Cocoa from Ghana, as well as the Ghana Olympic Committee (GOC) and the Ministry of Youth and Sports supporting us, so we are going to work hard to win medals to make them and the whole nation proud.”

“We have been training for almost a month because, we have our sights set on winning medals. We are confident about going out there to lift the flag of Ghana high.”

“The trip is a dream come true and as you know, it’s every athlete’s aim to win a medal, especially when given the opportunity to represent her country and that is going to be my objective too. I don’t intend to return home empty-handed.

“I am focused on what I am doing because I really want to go far in this competition for myself and also for my country.”

Ghana will be hoping to improve on the gold medal won by Martha Bissah in Nanjin in the 2014 Games.