Well, it’s happened. As predicted last month, WhatsApp has now finalized its multi-year long effort to bring end-to-end encryption to all aspects of the service, and to all of its users. The number of those, by the way, has grown to over 1 billion. That makes the Facebook-owned app essentially the second most popular social network after Facebook itself, which has around 1.5 billion users.

End-to-end encryption has showed up in WhatsApp for Android back in 2014, but from this point on it will work on any of the platforms on which the app is present (iOS, Android, Windows, S60, S40, and BlackBerry OS). What’s more, end-to-end encryption is there for one-on-one chats, group chats, voice calls, voice notes, attachments (think images and videos you share) – in a word, everything.

So you get end-to-end encryption even if you’re on an S40 phone talking to someone with an iPhone, for example. End-to-end encryption means that no one except you and the person or people you’re talking to can see or hear what you’re saying, not even WhatsApp or Facebook. Furthermore, WhatsApp doesn’t store your messages on its servers once they’re delivered to the intended recipient. This feature makes data requests from governments impossible to fulfill, since by design the company itself can not decrypt your communications. 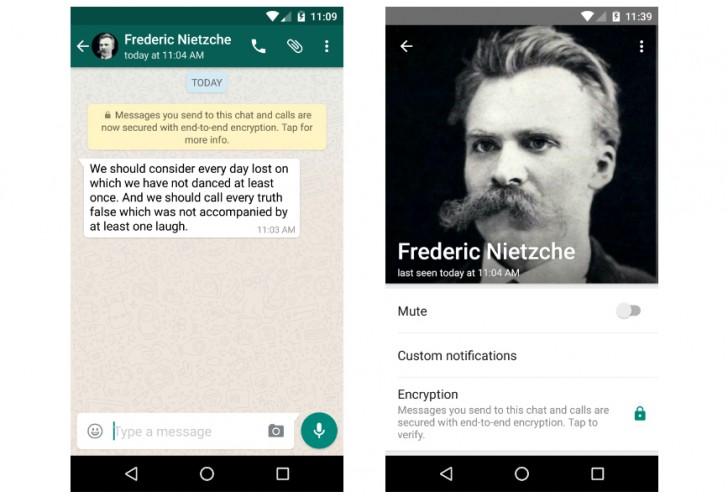 Because end-to-end encryption is turned on by default, all you need in order to take advantage of this feature is the latest version of WhatsApp installed on your mobile device. Since it may be that not everyone you talk to has the latest iteration of the app, until that transition happens there could still be some unencrypted chats. That’s why WhatsApp will notify you when your communications become end-to-end encrypted. This will show up as a notice in your conversation screens, as portrayed in the screenshot you can see on the left in the image above. And you can always check and make sure a particular conversation is end-to-end encrypted by going to its preferences screen (see the screenshot to the right).

Thanks for the tip, Ashish Chandra!