LG is continuing its teaser campaign for the V40 ThinQ smartphone that will become official on October 3. Thus, you don’t have a lot more to wait for the handset to be announced, but today the company making it has revealed a new feature it’s introducing with the V40.

It’s called Cine Shot. It’s a camera mode that lets you easily create cinemagraphs. These are like GIFs, but only a specific part of the image is moving – the rest is still. Think of them like a blend between a picture and a video and you’ll get the gist.

To capture a cinemagraph on the V40 ThinQ, you select the Cine Shot mode in the camera app, then hit the Record button to capture a small three-second video. You’ll want to be still for the duration, and the app will warn you if it detects too much shaking. 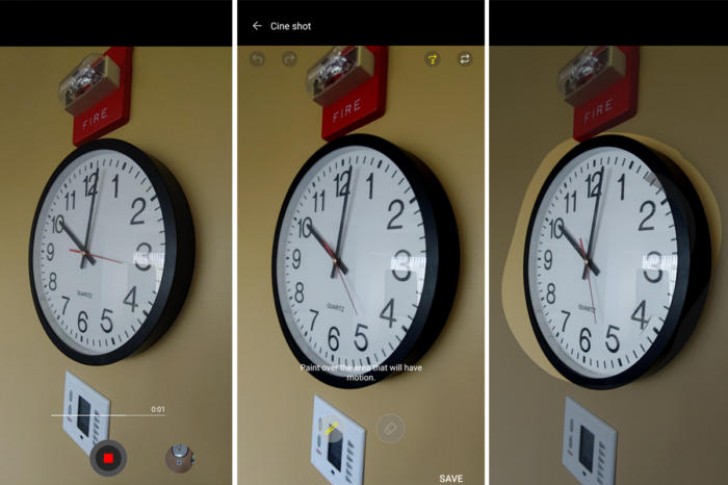 Once that’s done, you’re taken to an editing screen where you use your finger to ‘paint’ on top of the part you want moving – the clock in the example above. You also have an eraser tool in case you went too far with the finger tracing. You can even pinch to zoom in on small areas.

You then choose to have the three second video looped or bounce either forward or backward. The result is shareable either as a 1080p MP4 movie file or a GIF. Cinemagraphs can be set as live wallpapers on the phone too. Here are a few examples:

Note that once you capture the three-second video in Cine Shot mode, you will have to perform the edits outlined above there and then. You can’t save it and come back to it later in order to edit. Meanwhile, in low-light situations you could simply get an error message with nothing recorded.

Cine Shot works with all three of the LG V40 ThinQ’s rear cameras, of which one will be standard, one wide-angle, and one telephoto zoom lens. Cinemagraphs were a prominent feature of Nokia Lumia smartphones of years past, and currently the Moto Z3 Play also has the ability to create them.

It’s interesting that this function (don’t call it a gimmick) hasn’t caught on with other mobile device makers. LG seems to be pretty intent on highlighting Cine Shot as a differentiating feature of its upcoming flagship, so we’ll see how successful it’s going to become. What do you think – will this be the sort of thing you try once or twice and then forget about, or something you see yourself using every day?